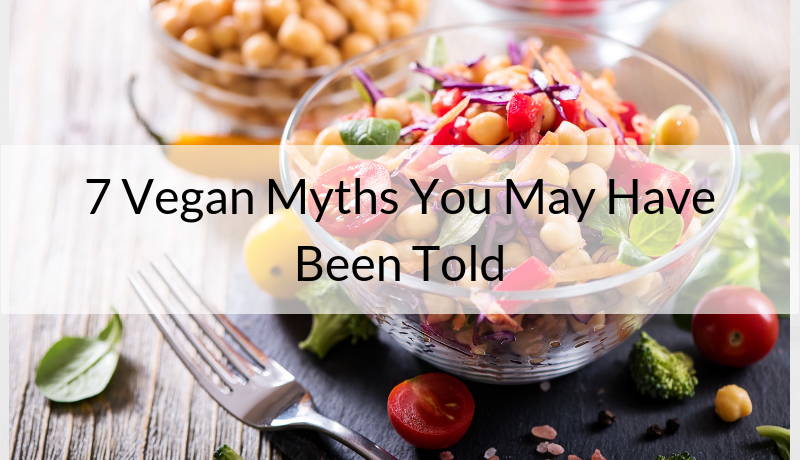 If you spend too much time on social media circles you might feel like there’s a war going on over dietary preferences. Dietary camps have been assembled, lines drawn in the sand, and proponents of each diet are slinging mud fighting over which diet is the best.

Instead of thoughtful, respectful conversation, social media forums devolve into diet memes and myths. One diet that gets a lot of mud slung at it is veganism. So let’s dive into some of the most common vegan myths, and set the record straight.

Disclaimer: BN Labs is not advocating for a vegan diet. We believe it’s possible to have a healthy diet as a vegan, vegetarian, or omnivore with the right balance of food choice. Accordingly, we strive to provide evidence based information for those striving to find that balance, regardless of their diet philosophy.

Just because you don’t eat meat, doesn’t mean you’re destined to be protein deficient. There are a variety of excellent plant based protein sources, including beans, legumes, nuts, seeds, quinoa, and soy. Even oats, green peas, and the microalgae spirulina provide protein.

This myth is rooted in the fact that there are fewer plant-based complete protein sources. If you’re eating highly processed packaged vegan foods, getting all 9 essential amino acids might be a challenge. But, if you’re eating a varied diet that consists of several different protein sources, getting all 9 essential amino acids shouldn’t be an issue. To learn more about the differences between plant and animal protein sources, check out this recent article.

2) You Can’t Build Muscle on a Vegan Diet

There are some phenomenal athletes who follow a vegan diet, from bodybuilders, to soccer players, football stars, MMA Fighters and track and field legends. In fact, Carl Lewis, the track legend himself has stated that his best year of competitions was the first year that he started a vegan diet. There’s no shortage of vegan athletes, showcasing bulk and brawn. Clearly you can build muscle on a vegan diet. So, where does this myth come from?

The myth can likely be traced back to myth #1. Protein is the building block of muscle, and a lot of other tissues in the human body as well. So, the myth is that vegan diets don’t provide enough protein, and therefore can’t build significant amounts of muscle. To build muscle you need a balanced diet that provides adequate protein, energy, and nutrients. What’s key is maintaining that balance - not whether or not you include meat.

Some of the best cuisines in the world are vegan and/or vegetarian friendly. Indian food which is known for its rich aroma and flavorful meals are often already vegan or vegetarian. The milk or cheese that is often included in vegetarian meals can be easily substituted with coconut alternatives.

Other cuisines, like Mediterranean, which features legumes and vegetables, can be easily followed on a vegan diet. The vegan foods that often get a bad rap are processed substitutes for meat or dairy products. Although these products have improved in recent years, they’re naturally going to taste inferior to someone with a meat adjusted palette. But, the best vegan foods are often the ones prepared at home with fresh vegetables, beans, nuts, or legumes - not the items found in a box.

4) Vegan Diets are Too Expensive

If you wander the grocery store these days you’ll notice a variety of new vegan friendly products. They have vegan cheese, butter, cookies, mayonnaise, and meat alternatives. If all you’re eating are those processed vegan food items that come in a box, yes, it can get quite expensive. However, these probably aren’t the best items to base your diet on anyways.

Following a traditional vegan diet that’s based on fruit, vegetables, nuts, and whole grains is actually quite affordable. Meat tends to be one of the most expensive line items in an omnivore's diet. Meanwhile, whole grains like quinoa, farro, bulgur and barley can be purchased fairly cheaply from the bulk section of many stores. And, you can supplement some of your fruits and vegetables by buying frozen, to trim back on the budget a little.

The dairy industry has been very successful at convincing us of the importance of milk for calcium and strong bones. Sure, dairy is a great source of calcium, but it’s not the only one.

One cup of cooked soybeans is able to provide almost 20% of the reference daily intake (RDI) of calcium. Plus, soybeans are a complete protein, providing all 9 essential amino acids. Beans, lentils, nuts and seeds also provide calcium, as well as various leafy green vegetables.

However, some leafy green vegetables do contain oxalates which can bind to calcium in your gut, reducing absorption. These high oxalate veggies include spinach, beet greens and chard. Instead, you can choose calcium rich veggies, with low oxalate, like broccoli.

Also, don’t forget that both orange juice and almond milk are fortified with calcium too.

6) Soy Causes Cancer and is Bad for You

The myth connecting soy and cancer is related to estrogen. An increase in the circulation of estrogen is linked to an increased risk for breast cancer, and soy contains phytoestrogens, which resemble estrogen in their composition. But that doesn’t mean phytoestrogens are a bad thing, or that they cause cancer. Some studies have actually shown some phytoestrogens can actually have anti-estrogenic protective effects, and possibly lower the risk of cancer.

If you are eating a vegan diet, it’s still a good idea to vary your diet, and to not rely entirely on soy for your protein needs.

7) Going Vegan is Too Difficult

Changing your diet always has its challenges. It requires you to learn about new foods or recipes that you might not be familiar with. There’s a learning curve anytime you choose to alter your typical behaviors or habits. But, if you’re interested in going vegan, there’s never been an easier time to do it. Aside from the proliferation of vegan oriented food products popping up on grocery shelves everywhere, the internet is full of resources and recipes for vegans.

Going vegan might not be for everybody. But if you’re interested in trying it out, you can start by reducing the amount of animal products you consume. Then, as you become more familiar with your new eating habits, and recipes, you can transition to becoming full vegan.

And, Vegan or not, BN Labs has you covered. We carry top quality vegan protein, grass-fed whey protein, and wellness supplements to keep you performing at your best.